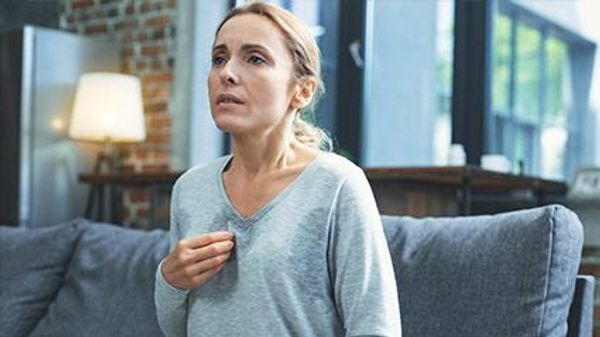 MONDAY, June 13, 2022 (HealthDay News) — Hot flashes are one of the most well-known symptoms of menopause and they can be severe and frequent, happening throughout the day and night over several years.

Researchers say they have found a new, effective treatment that could provide relief and an alternative to existing therapies.

“The simple truth is for many years, we did not even know or understand the biology of hot flashes,” said study author Dr. Genevieve Neal-Perry.

Only in the past decade have doctors begun to understand how certain neurons are affected by reduced estrogen levels during menopause, triggering the bothersome flushing and sweats, said Neal-Perry, chair of obstetrics and gynecology at the University of North Carolina School of Medicine.

That prevents the hot flash, she explained.

“Having treatments that actually reduce the hot flash improves quality of life, as well as some other medical conditions that are associated with individuals who have a lot of hot flashes,” Neal-Perry said. It also allows these women to function at a level that they did before menopause, she added.

The researchers studying fezolinetant recently released the results for a phase 3 trial — the final step before U.S. Food and Drug Administration approval. The study included 501 postmenopausal women, ages 40 to 65, who had an average of seven or more moderate-to-severe hot flashes a day. The women were randomized to take either a placebo daily, or one of two dose options of fezolinetant for 12 weeks.

Later, those on the placebo were re-randomized to take either the 30 mg or 45 mg dose of the drug. Those originally on the drug remained on their dose for 40 more weeks.

Though women still, on average, had some hot flashes, the team found a significant reduction in their number and severity in the drug groups compared to the placebo group through week 12. Those who continued through the 52-week study period continued to have those improvements. The women from the placebo group who switched to the drug later also experienced those gains.

The study was paid for by drug maker Astellas Pharma Inc.

Neal-Perry presented the study Saturday at the Endocrine Society’s annual meeting, in Atlanta. Findings presented at medical meetings are considered preliminary until published in a peer-reviewed journal.

The most effective current treatment for menopause symptoms is hormone therapy, either estrogen alone or in combination with progestogen, said Dr. JoAnn Pinkerton, director of the Midlife Health Center at the University of Virginia Health System. She was not involved in the study.

However, there are risks associated with hormone therapy, and not everyone can or will take it, Pinkerton said. Non-estrogen prescription therapies include low-dose antidepressants and medications such as gabapentin, clonidine and oxybutynin, although only one, a low-dose paroxetine salt, has been approved by FDA for hot flashes. None work as well as hormone therapy, she said.

“Women feel frustrated by all the contradictions they face from their health care providers, the misinformation circulating on the internet, and the wives’ tales they’ve heard from their friends and relatives. This often leads to incorrect treatment, fear of treatment, no treatment or inaction,” Pinkerton said.

Pinkerton noted the positive results of the fezolinetant study. “This therapy appears to be ‘first in its kind’ and will hopefully receive FDA approval providing us a safe and effective non-hormone therapy for women with bothersome hot flashes,” she said.

“Since it does not contain hormones, it will be an option for women with prior estrogen-sensitive cancers, those with blood clots or other medical reasons to avoid hormone therapy,” Pinkerton said.

The abstract does not provide data on side effects or risks, Pinkerton also noted. Earlier products had liver issues but this was not seen with fezolinetant, she said.

“Learning about any differing effects with different ethnic groups, older women who have persistent hot flashes, or obese women often excluded from clinical trials will be important,” Pinkerton said.

Neal-Perry noted that some of the existing treatments are not as effective for women of color, who also tend to experience hot flashes for more years than white women do.

She added that the new drug “really advances the field of menopausal therapy by many years because there really hasn’t been anything new on the market in many years.”

In the study, researchers saw impact from the drug within a week, Neal-Perry said. It’s not clear how long a woman would need to take the medication or if her symptoms would resume once she stops taking it. Hot flashes recede over time, naturally.

Researchers would also like to know more about the impact of this drug on sleep and other quality of life issues, such as depression and sexual function, Neal-Perry said.

“These are all things that we know are impacted during the menopausal transition and menopause, and just understanding whether this treatment may improve some of these concerns is really important,” she said.

The U.S. National Institute on Aging has more on menopause.